Documenting the Trip to the Southland

Sat - Went to the dentist to get my teeth fixed for free (made possible through the generous sponsorship from the parentals). It's all guilt, they get honestly mad if I spend too much of my own money because in L.A. you can go to a Korean establishment and get everything for cheaper..and my parents won;t only show me the way, they will pay for it. That's how they show their love. old school Korean style. How can I deny love. You don't understand or maybe you do, but if you only saw their faces when I try to decline their offer - you'd understand. Plus I went a dentist up here for my diagnostic and scaling - came away with a $4,000 dental plan. Stressed me out for a week...felt like all my teeth were going to rot out unless I got rich quick. So I tell him (Korean) what she (Filipino) said and he says it's actually less than $1000 (given he just did a quick look scan), but of course he had to add "Filipinos are a problem." To which I had no comment.

Went to the Torrance Farmers market. Bought some Bison meat which they claim to be healthier and leaner than most other meats except chicken, but left before even getting a chance to cook and try it. Chicken always comes out top. The bison still sits in my parents fridge as we speak. Bought some fruit, ate some food and played in the park with Harmony, taught her, kind of, how to roll down the hill. No body bought the pies from the lonely pie lady.

On whim we decide to go the OCF - Orange County Fair

Man, all that for the low admission cost of $11. Worth it. Food though, that's where the money is made or lost depending on where you are: vender or consumer.

Rodeos are rad by the way! Always wanted to go, never knew. Add that to your bucket list. 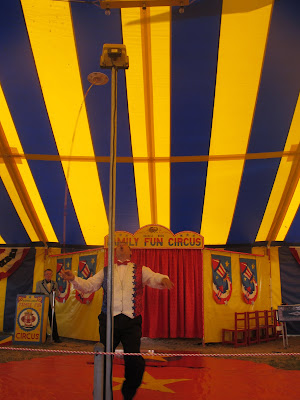 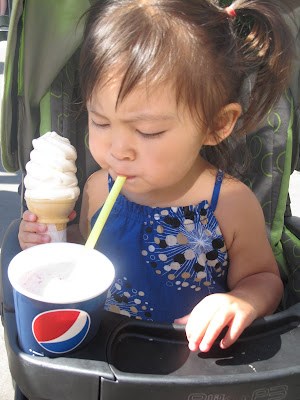 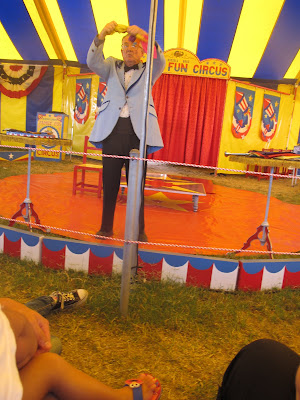 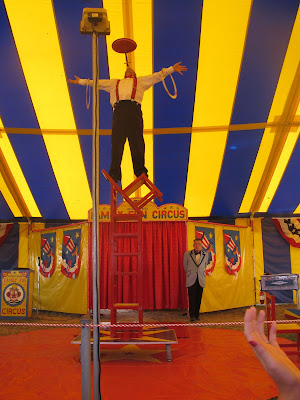 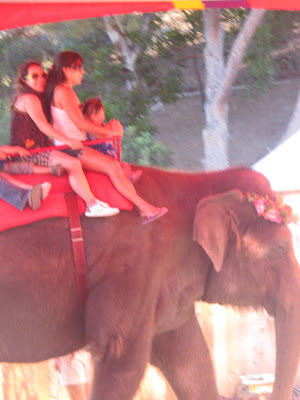 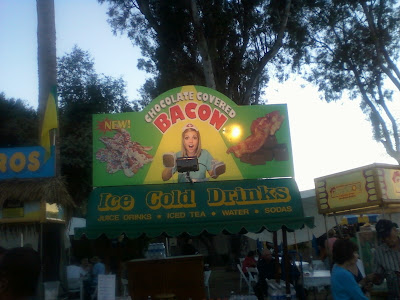 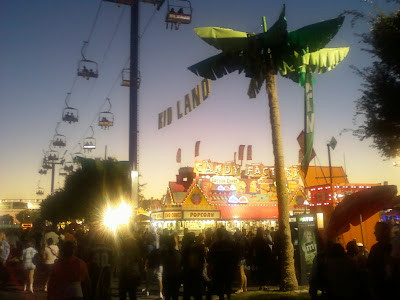 Loved it! Recommend it to everyone and anyone. Something for the whole family, something for everyone: gangsters, cowboys, girlfriends, artists, dancers, lovers, old people, motorcyclists, biker gang members, yuppies, gays, people who believe in sasquatch, Russians....oh but not hipsters, I saw no hipsters.

Sunday - 8am Harmony wakes up, climbs down the stairs and looks for "oncol daybit". Finds him passed out on the couch because he has no where to lay his head in his (well, his parents) own home. His former room is well, former - full of kids toys and clothes. We attempt to get breakfast at the Original Pancake House which upon arrival had just as many people tailgating while waiting as there were inside. So pass. Ended up getting Y Not (3 stars), like half a block from my house after driving around for 5 miles.

Headed to Reality L.A. with my sister close behind. My sister, I never have to worry about losing, she's one who I have 100% confidence will be following right behind me no matter what crazy L.A. driver tries to come between us. Inseparable. You know why? because she's one of them: a crazy L.A. driver just like me. Birds of the feather flock together. So enroute we get lost for like 30 minutes before finding the place. Elaine and I get in a fight..but we need not talk about that here. The stupidest thing was in the end I realized I knew where the place was, but for some reason I go to google and look up directions (now I'm not blaming google for getting us lost, it was human error, I read the directions wrong), it's like drugs, we don't need them but we're so used to them we take them without even thinking. Luckily the guy talked for a long time so we made it for half the message, and got to listen to the band, who was so nicely, hollwoodly polished that I had to put on my sunglasses, so I wouldn't go blind or maybe to blend in, or feign ignorance by cutting off all chance of making eye contact with anybody.

Jimmey Chen, my friend from back in SF, attends the church so we had kabob lunch afterwards.

We parted ways: Elaine to the her wedding (which is really why we came down(I tagged along to L.A.)), Jimmy to his BBQ, My sister, Harmony and I LACMA bound.
Posted by Dave Kim at 1:48 AM 1 comment:

When self confidence starts to wane you grab for anything to gain it back as soon as is possible. And usually that thing isn't the best choice, it's a temporary plug to fill the hole but in reality the hole still exists. Sometimes its best to live in that lack, because it takes time to get rid of the hole for good.
Posted by Dave Kim at 12:23 AM No comments:


Why is it that when someone comes from a disadvantaged life, the incredible talent they have moves you to the core until you can't help but to cry?
Posted by Dave Kim at 1:58 AM No comments: