My boy Desi did this in honor of his grandmother, Bama, who may not be with us much longer. I love this aspect of graffiti - the dedicating of walls to people who may never see the actual piece except in photographic form. She might never make it out to Oakland to see it in person, but it's there for her.
It's creation of an art landmark, a tiny part of the city's landscape altered in celebration of a certain loved individual...there's something poetic about that. 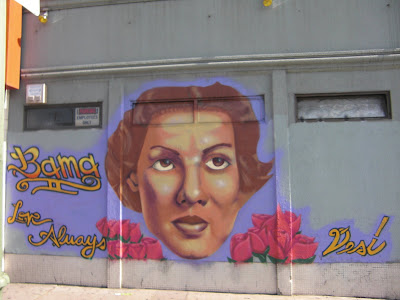 I heard this song randomly when I went short notice to meet up with an old college friend of mine in the City. I like it. It's about hand stands. kinda

Hadn't seen the guy in years, 2-3 maybe. He got married in Jersey and I didn't make it. He's exactly the same, I'm not sure if that's a good or bad thing but he is, the way he talks, laughs after saying something embarrassing and even how he pokes, not once but twice. Drank a little too much, took a cab to get some Thai food, dropped Omicel home and went home to Oakland. Oh by-the-way when you're in really good healthy marathon running shape, you can really feel the alcohol, feels kind of like poison. 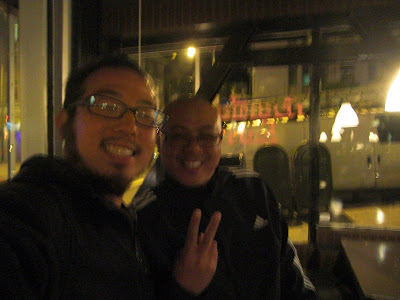 You ever seen that flick The Diving Bell and the Butterfly. Before I watched the film I was trying to come up with an image that symbolically represented what someone would feel like if they were perfectly fine as far as brain activity but their body weren't functioning right, the body becomes a prison - I think it's called locked in syndrome. It was so intrigued and saddened by what that must be like and I wanted to try and depict that in a way that would help me empathize, a way that might make more sense to my own life experiences, and share that with others, but I could never find the right imagery. Then one day I saw the film and was like, holy crap!! That's it...a dude stuck in a diving bell in the depths of the ocean. I've never been in a diving bell and I doubt many nowadays have but the message was clear. If you don't know what a diving bell is it's one of those old school all heavy metal diving suits that weigh a ton. A perfectly healthy person stuck in a broken, immobile shell. So the story is actually a true one based on a memior written by French journalist Jean-Dominique Bauby who woke up completely paralyzed after suffering a massive stroke, the book was written entirely by Bauby blinking his left eyelid. His imagination literally set him free. Crazy huh? Watch the movie. Anyhow so the eye writer totally blow me away. Chills seriously riding down my back as I'm watching this.

The Eyewriter from Evan Roth on Vimeo.