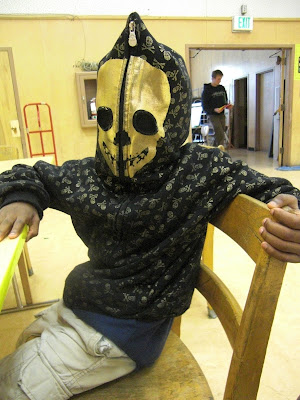 This is Dontae Dickson, the kid I worked with last year. I love this guy. I requested to work with him again this year. Third grade, eight years old. Has a pit named Cocoa Butter Puff, no lie. And he loves seafood.
Community United Elementary School (CUES), forme
rly known as Lockwood Elementary was one of lowest scoring schools around. It still serves one of Oakland's poorest and most crime-ridden neighborhoods, with nearly all of its students coming from families whose earnings fall below the federal poverty level. We go in each Friday and tutor the kids in literacy. You should come too.
By-the-way, Dontae got through all 3 sets of his sight words today. Sight words are common words that we have memorized so that as we read they are immediately recognized. This is the score card where you get a sticker for every 10 words, notice how the entire section is filled, if you run your hand over it you'd feel the texture from all the stickers. That's the tactile sense of accomplishment. 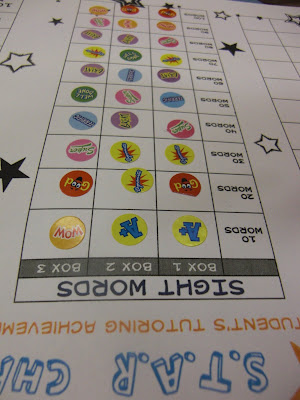 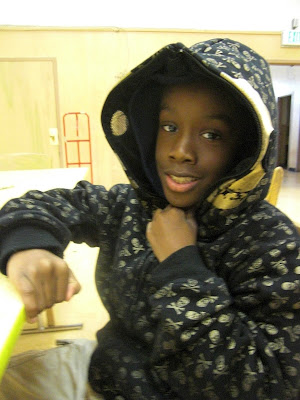 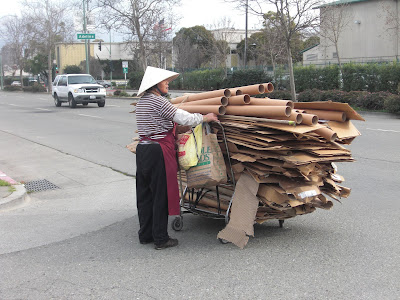 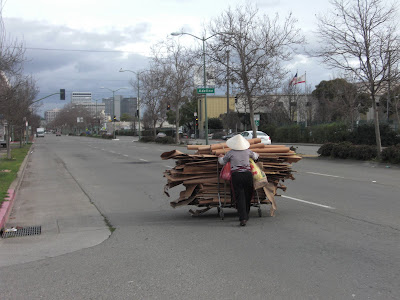 Here's a poster I did for a Haiti Bowling Benefit Tournament my friends in the city are putting on.
Bowl Haiti
Date: February 21st, 2010
Time: 11:00 AM
Location: Serra Bowl, Daly City
For information and registration, go to www.jrunkinc.com
Prints were made and the original is being raffled off at the tourney. If there are any left, they'll be for sale. All proceeds of course going to Haiti, not sure which specific org.
Water color and ink on heavy watercolor paper. 26x40 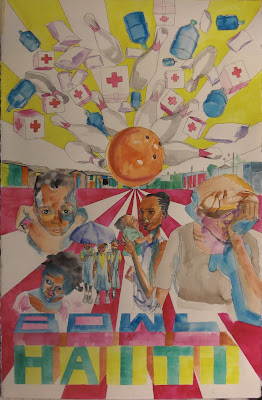 I was thinking of going to Cambodia over the summer so I went to the church in the hills where the meeting was supposed to be and after a long unfruitful search through the labyrinth like campus I found out that it was canceled.

So feeling tired I was just going to go to the studio and do a painting of the impenetrable walls of Pyongyang North Korea and the devastation that lies beyond, and something about the curiousity of the children within wondering what lurks outside the city. All based on a NPR broadcast about the education of the elite children in the capital city I was listening to on the way to the church. But then I called my boy because he texted a seemingly distressed message about one of his old murals being buffed.

He wasn't actually tripping, he was working on a piece dedicated to his dad for his birthday at the tracks so I went to join him.

I got there, he was about done, so we walked down the wall as he told me stories about the pieces. Then we walked back, sat on the tracks, examined his piece from the distance and then started throwing rocks trying to hit an empty spray can, all while exchanging about our recent experiences with girls, naturally, given it's Valentines day. The rock throwing becomes incredibly addicting, you hit it once and you want to do it again, then you get frustrated and take a handful of pebbles, shot gun blast them but then all miss and so you vow to hit it once more and quit. It gets competitive for a moment when you're threatened with 2 direct hits before your one and before you know it both of you are standing, trying to get a better vantage. Finally, one bounce hits and it's not completely satisfying but it is good enough and you both decide to stop.

We go and finish off the piece by adding shadows, snap a flick and proceed to try and pop the empties by bashing them with rocks before we go. We don't want to leave even a drop of paint in case some punk kids come by and want to mess up the piece.

The 23rd Tracks in Oakland 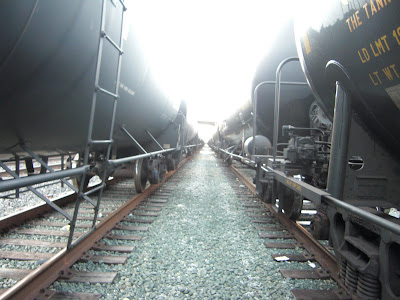 The piece done for his dad Jays birthday. Double letters: "Dad" and "Jay" 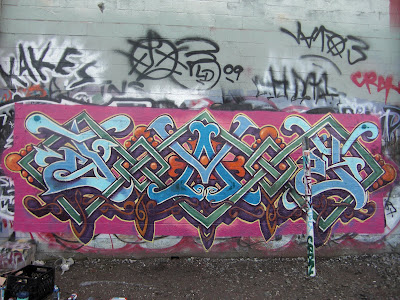 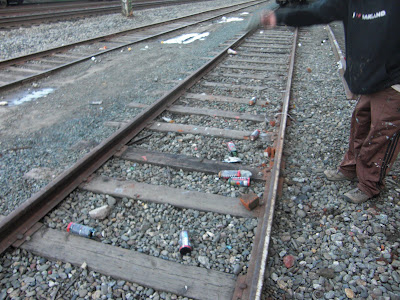 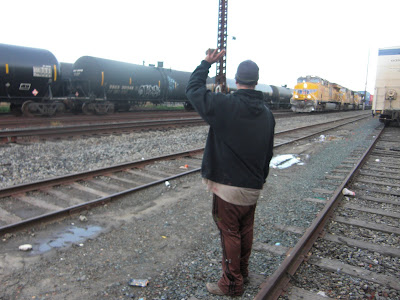 I dont know who this dude is, I think he writes Remex but I like his style..the aquatic theme is clean. I've seen another piece of his, it was a tiger one, i'll try and post a flick later down the line when I get one. 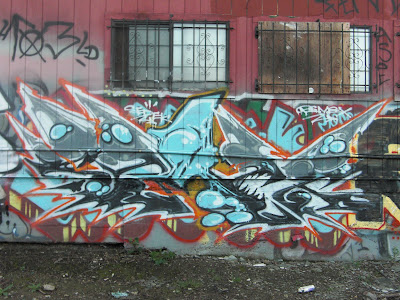 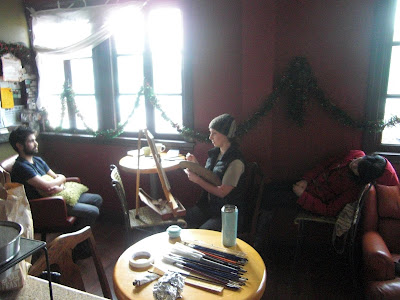 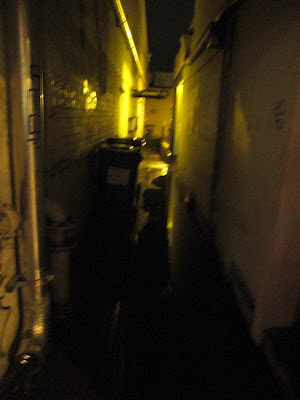 Mound of bones. Wing Stop, my first time there. 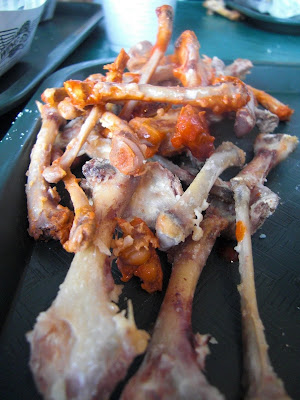 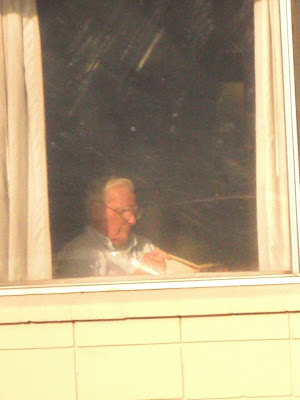 Sketches for a collab piece coming soon. Stay tuned, it's gonna be dope. 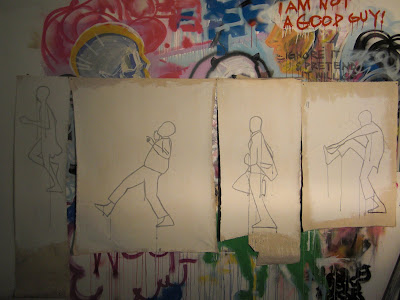 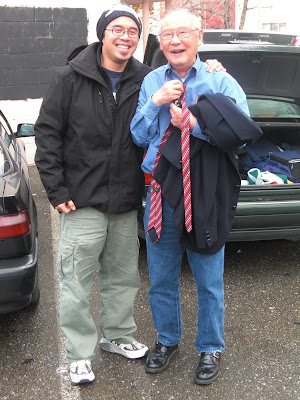 Spying on wreck in Richmond 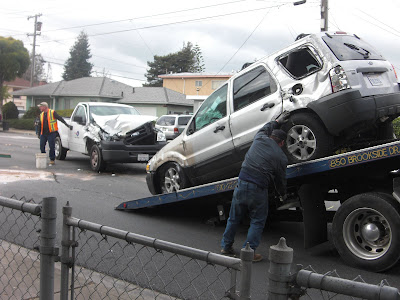 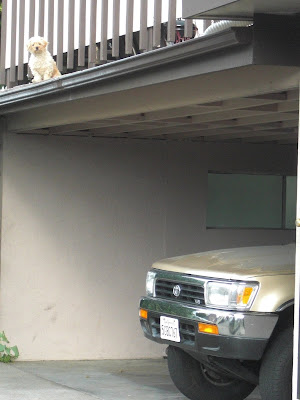 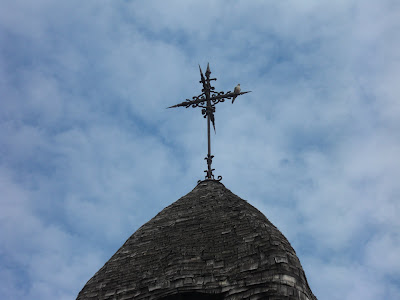 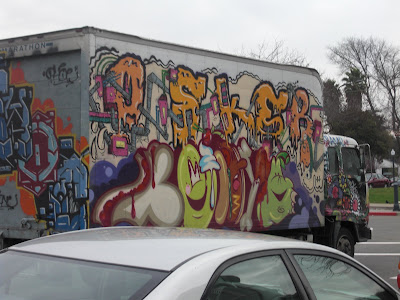 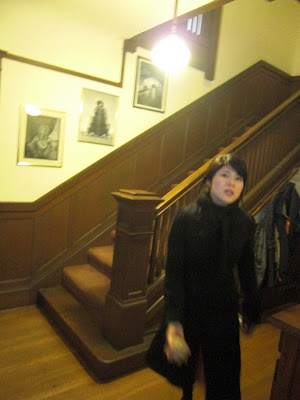 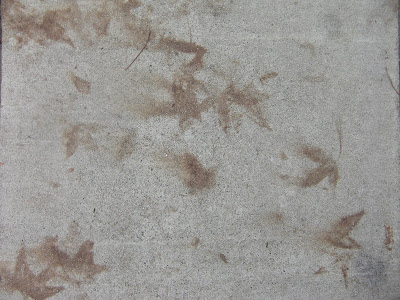 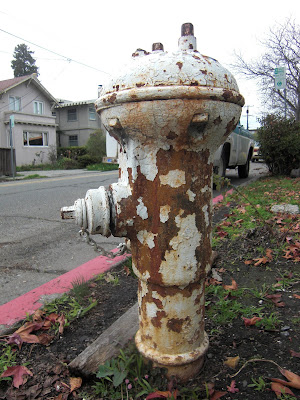 Madalyn in England.
Really in Berkeley. A concept I've been thinking about for a long time. Photos of local spots in Oakland or whereever that look like other distant lands and labeling them that. Watch out because I just may start doing that, don't start tripping out, What! Daves in Nairobi! I saw just saw that guy like an hour ago. 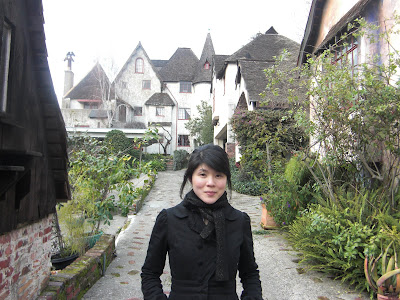 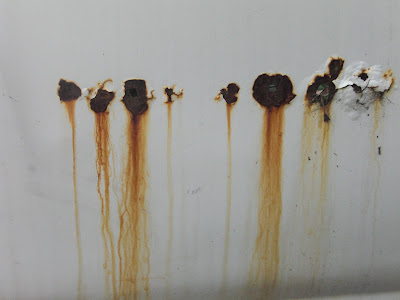 I love the cool tones in this shadow. 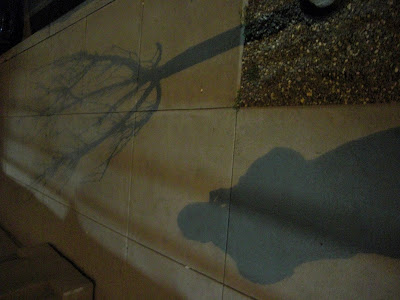 Jesus came by the church the other night. 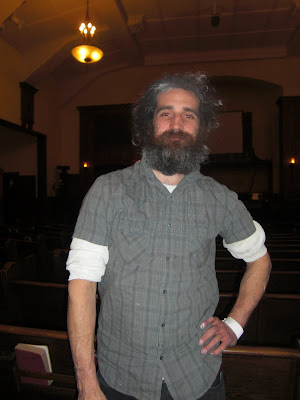 Headshot of the son of man. If I were to draw Jesus I'd draw him like this. Expect he probably would've looked nothing like this. I read that the beard would be trim and the hair real short, and the guy was mid eastern, but I've been to Israel and the Jews are all light complexed so I don't know. I wish some frikin artist would tell the truth for once and draw Jesus like he wouldve really historically looked. I'm sick of the Swedish version.
Oh the real story on this guy, Jason is his name. He and his dad go around whereever they open Shiekh Shoes and do the insides of all the stores. They're working on one at the Eastmont mall. Nice dude.