So I have these neighbors that live behind me, my second story window and patio looks directly down into their back patio.Anyhow so there's a family that lives there but its also home to the son a younger guy, Chinese or Vietnamese I still havent figured out yet its really hard to tell for some reason, in his low 20s. He and his homeboys have made it their headquarters, their kick it spot, so I see and hear them all time smoking or drinking out back. But these guys are ghetto style, straight Oakland Asians. I've been wanting to connect with them for a long time but I havent really found the opening. I did once go up to them to invite them to the movie night but that was it and I do say whats up to them from up top but I dont want to intrude on their partying so I usually dont. The thing is the only time I really see them is when they are out back toking up, so thats the best place to strike up a convo. So today I go out back to grab something from my patio and I see the dudes and they were weighing out their twamp sacks, I didnt really notice what they were up to initially so I said whats up, and they replied but they kept looking at me uncomfortably thats when I realized what they were doing. I dont care, I not going to call the cops. So I get home tonight and I look out to see that they put up a sheet to hide their business, I found it funny after all this time they finally think to put something up. 3 years I've been here and now the opportunity is lost, not really but the most obvious way is. I'll just have to be more intentional now. 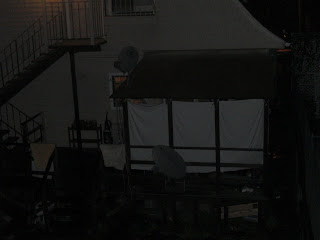 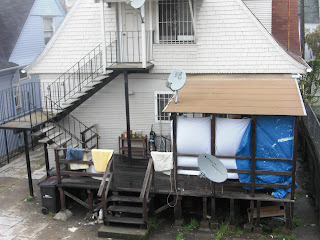