Email: "Dear Dudes, have you seen my green backpacker back pack? It was in the basement but now it's gone. Maybe one of you borrowed it?"

No reply. Lost cause. Gone forever.

2 days later I get a phone call from Zach.

Zach:
"Dave, I just saw your back pack. I was running around the lake and the guy who sits there everyday has it."

Dave:
"Come with me, let's go!"  Sudden adrenaline rush.
"Wait, we need to take something to exchange with him." So I grab a suitcase from the basement before taking off.

Dave:
"How you doing? I'm pretty sure that's my back pack. I'm here to ask for it back. Will you give it me? We brought this suitcase here so that you have somewhere to put your clothes."

Dude with sunglasses and bike that kicks it on the same spot by the lake, you know that guy:
"It's not yours. How do you know it's yours?"

Dave:
"I could prove it to you. On the inside there's a net and the name of the backpack "Traverse". Check it out. Let's see."

Starting to get angry - this is going no where, contemplating just grabbing it and running or taking the bike and then when he asks for it back, saying "prove it" "how do you know?" But I decide to call the cops. Not wanting to add another petty, ugly thing to all the other petty, stupid things already existing in Oakland. I even think about just letting him have it and walking away - maybe he really needs it, I have the means (somehow or another -  even though the backpack cost me $300 and I'm pretty broke), maybe he doesn't, he's homeless or at least plays the part well.

For some reason the cops can't find us. It's stupid.

The dude gets tired of waiting and decides to hop on his bike and ride to the local OPD substation. We chase him. It's kind of a hilarious sight; one bearded asian dude, one bearded white dude running behind a black, bearded dude on a bike. The substation was empty so he road on. We're getting pretty upset at this point. Feeling stupid.  We happen to see a cop car and tell them the short version. They catch him. He refuses to return the backpack for a long while and finally decides he would. The cops can't legally make him even though I could describe distinguishing features.

The pack reeks of bum and piss. I wash and leave it out back to dry. It gets stolen again. I can't win.

It's sentimental. She's been with me to over 20 countries. I try to take her out once in while so that she can live to her fullest potential. Do what she was created to do. I'm afraid whoever has her now wouldn't. Stuck in the urban jungle.

I run the lake a few times a week the see the guy. I try to say hi but he never sees me or feigns it. Whatever.

Me and her. We were united - one. Now we're separated forever. 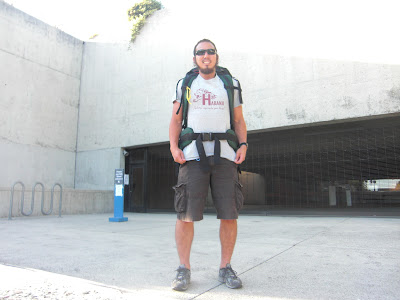